Aberdeen is Scotland’s third most populous city with an official population estimate of 196,670 for the city of Aberdeen and 229,800 for the local authority area.

Nicknames include the Granite City, the Grey City and the Silver City with the Golden Sands. During the mid-18th to mid-20th centuries, Aberdeen’s buildings incorporated locally quarried grey granite, which can sparkle like silver because of its high mica content. Since the discovery of North Sea oil in the 1970s, Aberdeen has been known as the off-shore oil capital of Europe. The area around Aberdeen has been settled since at least 8,000 years ago, when prehistoric villages lay around the mouths of the rivers Dee and Don. The city has a long, sandy coastline and a marine climate, the latter resulting in chilly summers and mild winters.

Aberdeen received Royal burgh status from David I of Scotland (1124–53), transforming the city economically. The city’s two universities, the University of Aberdeen, founded in 1495, and Robert Gordon University, which was awarded university status in 1992, make Aberdeen the educational centre of the north-east of Scotland. The traditional industries of fishing, paper-making, shipbuilding, and textiles have been overtaken by the oil industry and Aberdeen’s seaport. Aberdeen Heliport is one of the busiest commercial heliports in the world and the seaport is the largest in the north-east of Scotland.

Aberdeen has won the Britain in Bloom competition a record-breaking ten times, and hosts the Aberdeen International Youth Festival, a major international event which attracts up to 1000 of the most talented young performing arts companies. In 2015, Mercer named Aberdeen the 57th most liveable city in the world, as well as the fourth most liveable city in Britain. In 2012, HSBC named Aberdeen as a leading business hub and one of eight ‘super cities’ spearheading the UK’s economy, marking it as the only city in Scotland to receive this accolade.

Aberdeen area has seen human settlement for at least 8,000 years. The city began as two separate burghs: Old Aberdeen at the mouth of the river Don; and New Aberdeen, a fishing and trading settlement, where the Denburn waterway entered the river Dee estuary. 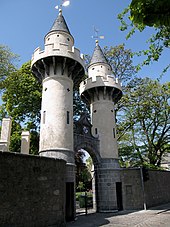 During the Wars of the Three Kingdoms of 1644–1647 the city was plundered by both sides. In 1644, it was taken and ransacked by Royalist troops after the Battle of Aberdeen and two years later it was stormed by a Royalist force under the command of the Marquis of Huntly. In 1647 an outbreak of bubonic plague killed a quarter of the population. The council began major road improvements at the end of the 18th century with the main thoroughfares of George Street, King Street and Union Street all completed at the beginning of the 19th century. 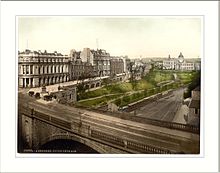 The increasing economic importance of Aberdeen and the development of the shipbuilding and fishing industries led to the construction of the present harbour including Victoria Dock and the South Breakwater, and the extension of the North Pier.

Aberdeen was in Pictish territory and became Gaelic-speaking at some time in the medieval period. Old Aberdeen is the approximate location of Aberdon, the first settlement of Aberdeen; this literally means “the mouth of the Don”. The Celtic word aber means “river mouth”. The Gaelic name is Obar Dheathain, and in Latin, the Romans referred to the river as Devana. Mediaeval (or Ecclesiastical) Latin has it as Aberdonia. 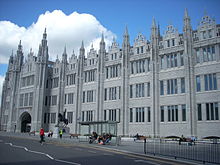 Bon Accord Square, designed by Archibald Simpson and dating from 1823 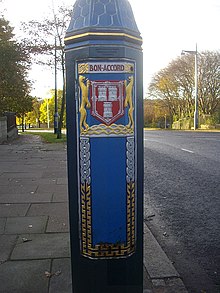 The arms and banner of the city show three silver towers on red. This motif dates from at least the time of Robert the Bruce and represents the buildings that stood on the three hills of medieval Aberdeen: Aberdeen Castle on Castle Hill (today’s Castlegate); the city gate on Port Hill; and a church on St Catherine’s Hill (now levelled).

Bon Accord is the motto of the city and is French for “Good Agreement”. Legend tells that its use dates from a password used by Robert the Bruce during the 14th century Wars of Scottish Independence, when he and his men laid siege to the English-held Aberdeen Castle before destroying it in 1308. It is still widely present in the city, throughout street names, business names and the city’s Bon Accord shopping mall.

The shield in the coat of arms is supported by two leopards. A local magazine is called the “Leopard” and, when Union Bridge was widened in the 20th century, small statues of the creature in a sitting position were cast and placed on top of the railing posts (known locally as Kelly’s Cats). The city’s toast is “Happy to meet, sorry to part, happy to meet again”.